Check out this wonderful letter to the editor about last Saturday’s “Moving Planet” rally by Paula Schramm, re-printed here from The Saint Albans Messenger. If you didn’t see anything about the Moving Planet event at the State House on Sat., Sept.24, there are some blogs and a video of a most impassioned speech given there by Gov. Shumlin that people should see. (There was not much ,if any, media present.)

There were at least 1,000 people at the rally, having traveled there by bicycle, bus, carpool and on foot from all over Vermont, to support and learn about alternative energy, and to push for an alternative energy future. This event was happening simultaneously at hundreds of sites around the globe, so was very inspiring !

At Montpelier there were many of the Vermonters who were arrested in Washington,D.C. during the 2-week demonstration in front of the White House against the Keystone XL Pipeline. This pipeline will stretch from the tar sands of Alberta, Canada across 6 U.S. states down to refineries in the Gulf and will bring oil produced by the most inefficient and dirtiest process possible, across rich farmland, native American lands and huge water aquifers supplying over 20 million people. People are concerned because they know the pipeline will have leaks, and that the planned area of the tar sands is the size of England and will put an amount of co2 into the atmosphere that will have a huge impact on climate change.

I joined 25 other Vermonters going down by bus on Sunday, Aug.28, having to drive 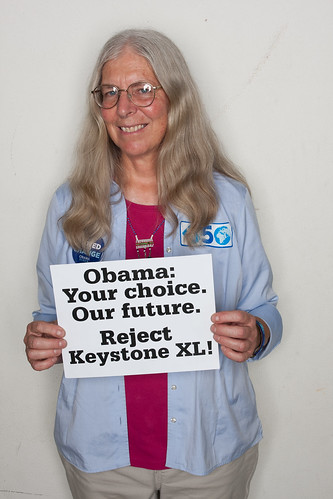 through the heavy rain of Irene as she swept up through Vermont. By the evening in D.C. we were hearing from friends and families, and seeing videos of the flooding as it was happening. It was heart-wrenching, but we understood all too well the connection of these severe climate events to the climate change that is already taking place. We felt that we were in the right place, pressuring President Obama to reject approval of this pipeline, which will serve to drastically increase our climate problems, and to turn instead towards energy development that will start to heal our planet, as he promised in his campaign.

Twenty-one of us were arrested on Tues., Aug.30 in a group of 73 total that day, and made the news because actress (and staunch environmentalist) Daryl Hannah was with us that day. Vermonters came down on other days too, and a total of 1,252 people were arrested in this protest of civil disobedience over 2 weeks. We were glad to hear the Governor make such a strong connection between the destruction and suffering wrought by Irene and our energy choices, and to pledge to make Vermont a leader for an alternative energy future.